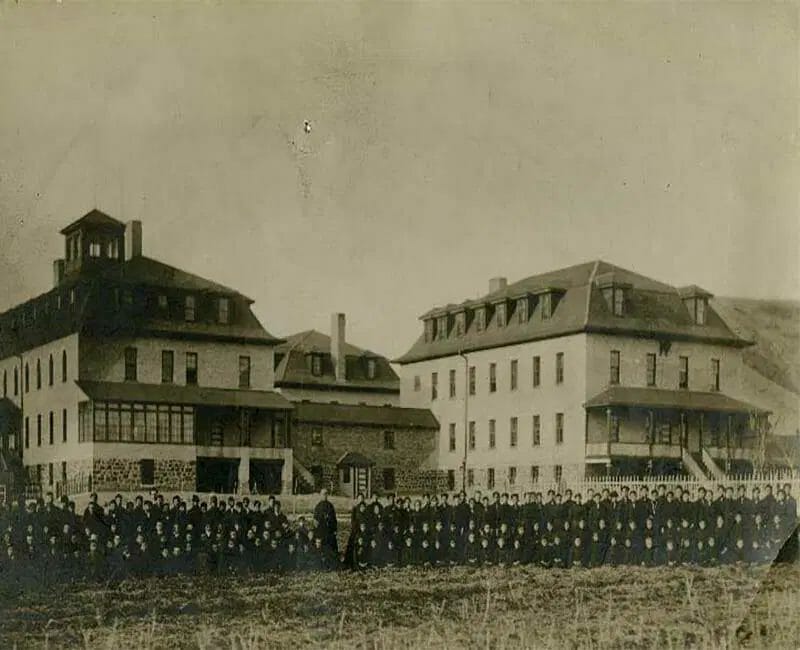 TRIGGER WARNING: The acknowledgement below contains sensitive and distressing information. The National Residential School Crisis Line is available for Survivors and those who need it at 1-866-925-4419.

Today, our hearts are heavy as we acknowledge the devastating findings on the grounds of the former Lebret Indian Industrial School (also known as Qu’Appelle Indian Residential School, St. Paul’s and Whitecalf). Star Blanket Cree Nation announced the discovery and identification of a jawbone of a four to six year old child, dated to approximately 125 years old.

Built on the Qu’Appelle Reserve and operated by the Roman Catholic Church (Missionary Oblates of Mary Immaculate and the Grey Nuns) beginning in 1884, the school was expanded in 1887, 1889, and 1895. Administration was transferred to the Qu’Appelle Indian Residential School Council in 1973 and the school finally closed in 1998, making it one of the last residential schools to close in Saskatchewan and the country. Lebret was one of the first schools in the West and began the model of government funding for religious orders to manage the schools.

A narrative history of the school was researched and produced by the Government of Canada as part of its response to litigation and the Indian Residential Schools Settlement  Agreement. The Truth and Reconciliation report noted the school’s high death rate.

Our thoughts and prayers are with Star Blanket Cree Nation, Survivors and their families and communities at this time. Star Blanket Cree Nation has found 2,000 anomalies through the use of ground-penetrating radar and will continue to work to identify missing children, as well as honouring Survivors and developing a memorial. Chief Michael Starr called for accountability and action from governments, the Catholic Church and other institutions who played a role in the residential school system and Federation of Sovereign Indigenous Nations Chief Bobby Cameron called for justice and immediate work, along with healing and wellness centres for Survivors and their families.

This announcement highlights the magnitude of the task ahead for families and communities as they find all their missing children who died to the violence and neglect of residential schools. The National Centre for Truth and Reconciliation is committed to carrying out this work and we continue to give our unwavering support to all communities.

A memorial page honouring those who attended the Lebret Indian Industrial School is available on our website and commemorates 56 children who never returned home.